The Collective is a group founded by Spinel before she Shattered and is now corrupt. Its current leader is unknown. They're made of the organizations Melty, Kamabo, and Delta Z. They are enemies of The Armada and have shown hostility towards Hat Kid and her crew. They were on Team Spades for Spinel's Game. More recently, they have been shown to have been trying to patch themselves together as a safe place for their citizens and have supposedly given up on conquering. This area has not been developed much in-game. 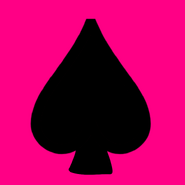 The Spades symbol.
Retrieved from "https://alocto.fandom.com/wiki/The_Collective?oldid=897"
Community content is available under CC-BY-SA unless otherwise noted.